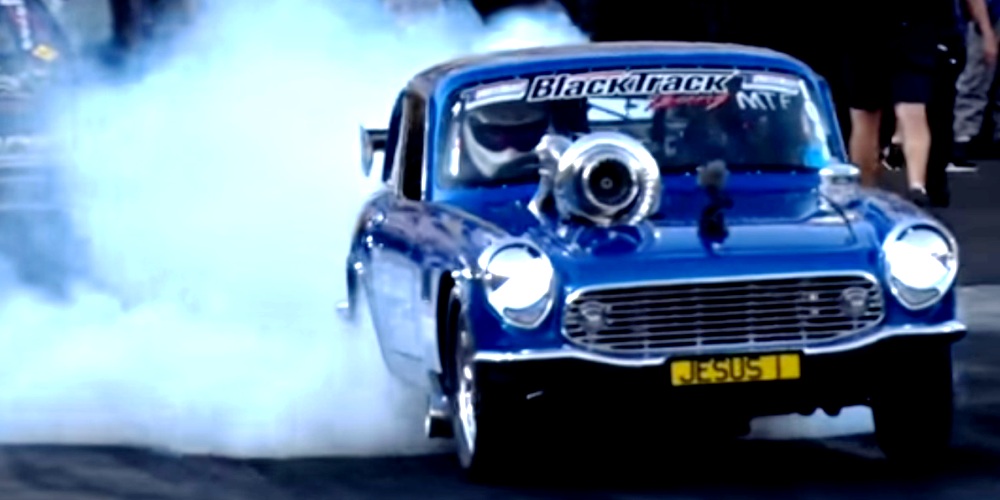 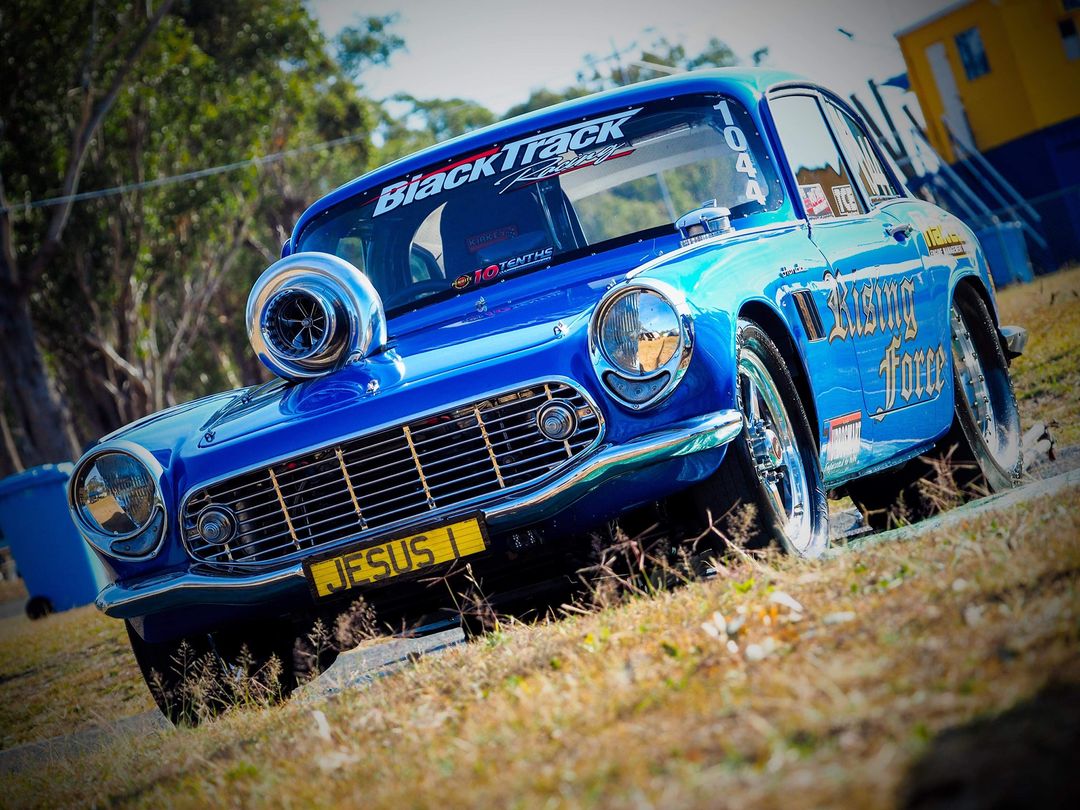 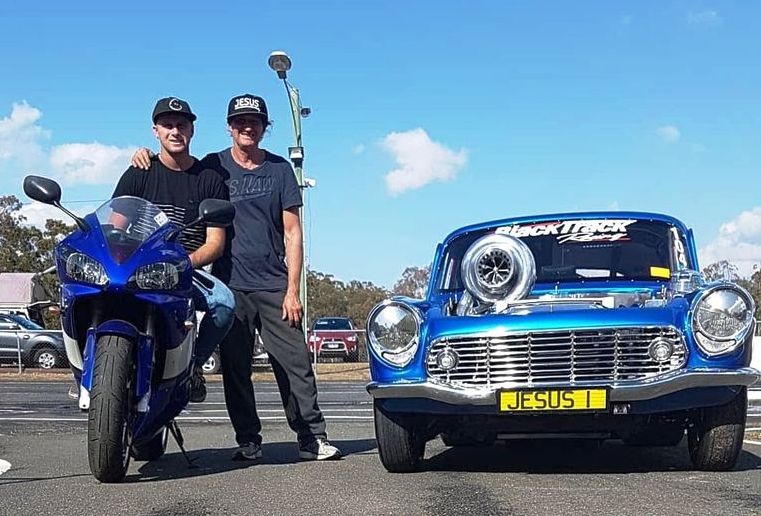 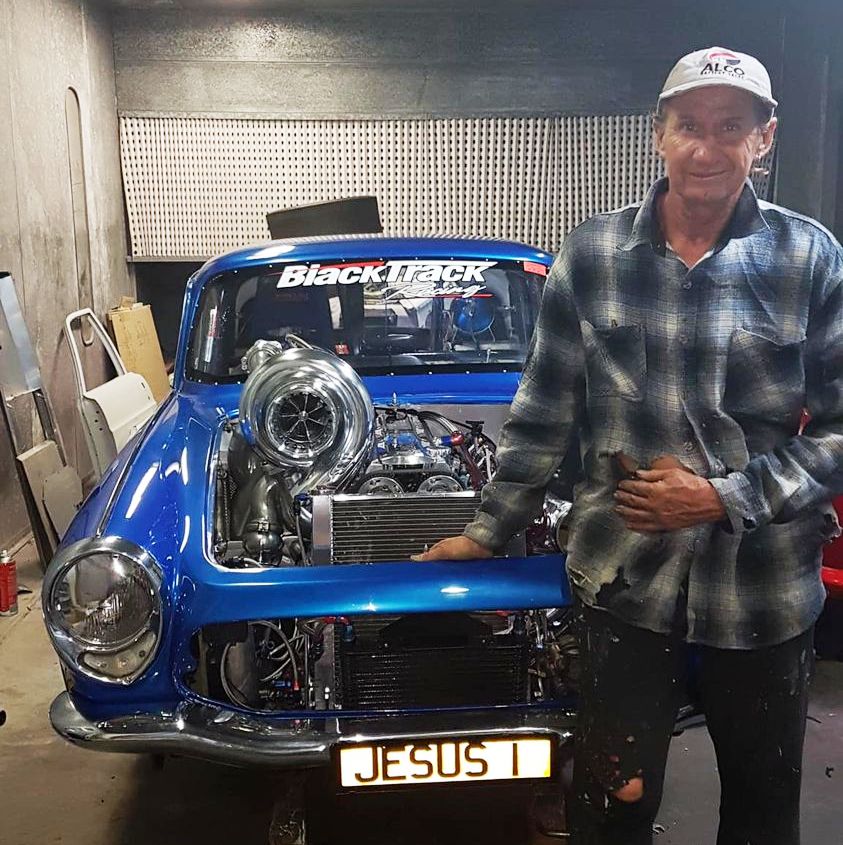 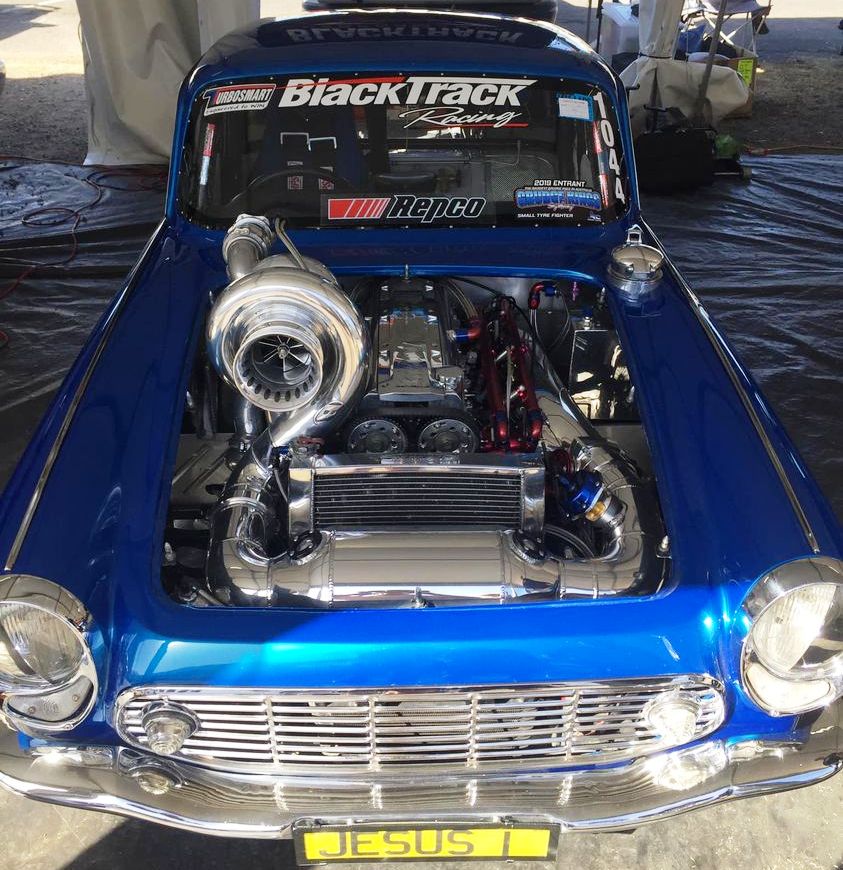 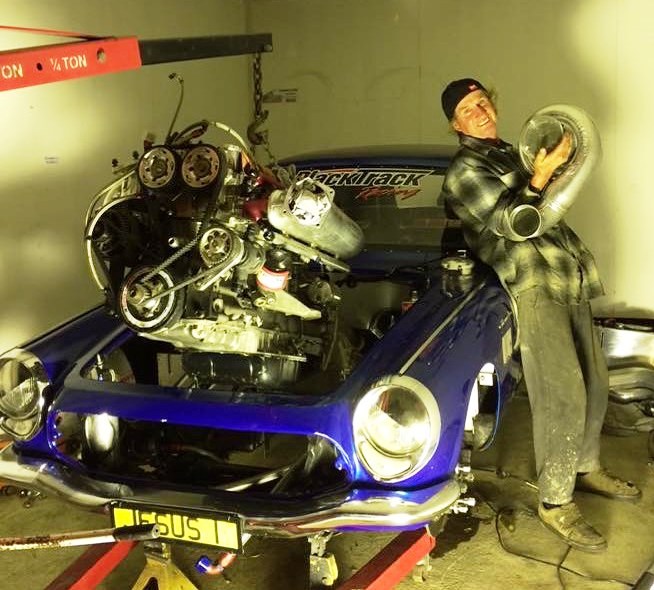 DISPLAY your Car FREE
Displayed Cars are for MEMBERS ONLY.

We have used the same software as our GARAGE & SHOWROOM so it may indicate For SALE at this early stage.
The Details Listing in this FREE section of each vehicle on VIEW is greatly reduced.

To SELL your CAR, with comprehensive details and VIN please LIST in our GARAGE & SHOWROOM

Also we are rebuilding the TurboClub.com website with three new sections.

*CARSHOW for Parking your Pride & Joy automobile that will be integrated into the main front pages of TurboClub.com

*GARAGE for display of any performance car buildups or modifications and also Car Business Services or Suppliers.

*SHOWROOM for SALES of Turbo and performance Cars – NEW & USED

All information will be posted on our page. https://www.facebook.com/risingforceracefabrications/ 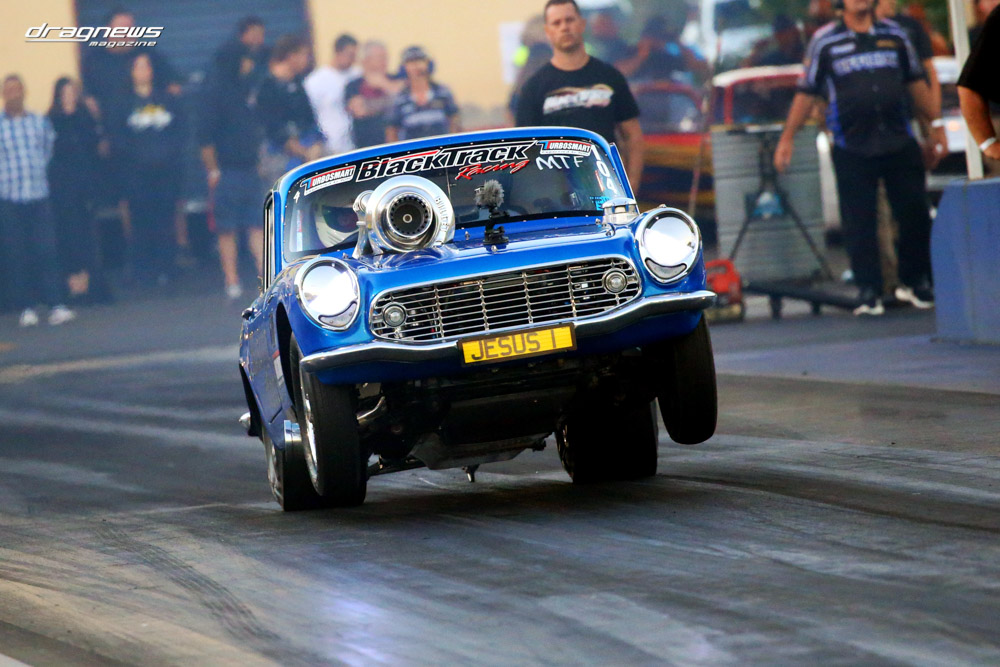 Two words can summarise Phil Penny’s Honda S600 – genre-defying. The body shouts nostalgia, but the turbo poking out of the bonnet argues an outlaw of some description. Between the chassis rails the Toyota 2JZ motor is all sport compact, but on the tyres it’s a 10.5. The conflict is just how Penny likes it.

The category this wild Honda belongs in is near enough to irrelevant. Built for fun and as a drag car that befits a showman, all you have to know is that it is beautiful, fast and damn unique. Penny has been mad about cars since he was a teenager, watching dragsters haul down Surfers Paradise International Raceway. He was lucky enough to make his first runs on a drag strip, in a 327ci HK Monaro, at the venue before it yielded to property developers and south east Queensland drag racing moved to Willowbank Raceway. “I used to watch everyone back then and say one day I would get one of them fast cars,” he said. “And I always liked something different.”

Small English cars were a first love, but outright speed was not the forte of the Brits and Penny found himself swayed by the Americans, with one of the more interesting pieces of iron in his collection being an AC Cobra kit car. “I did the Chevy 350, 327 thing for a few years and then got an interest in MGs and found my first Honda S600, a convertible in 1986.”

The S600 Penny races today was the Queensland equivalent of a barn find – discovered underneath a house. However the Japanese classic was in a poor condition, basically just a shell. “There was no chance of restoring it to be an original car but I always wanted a coupe,” Penny said. 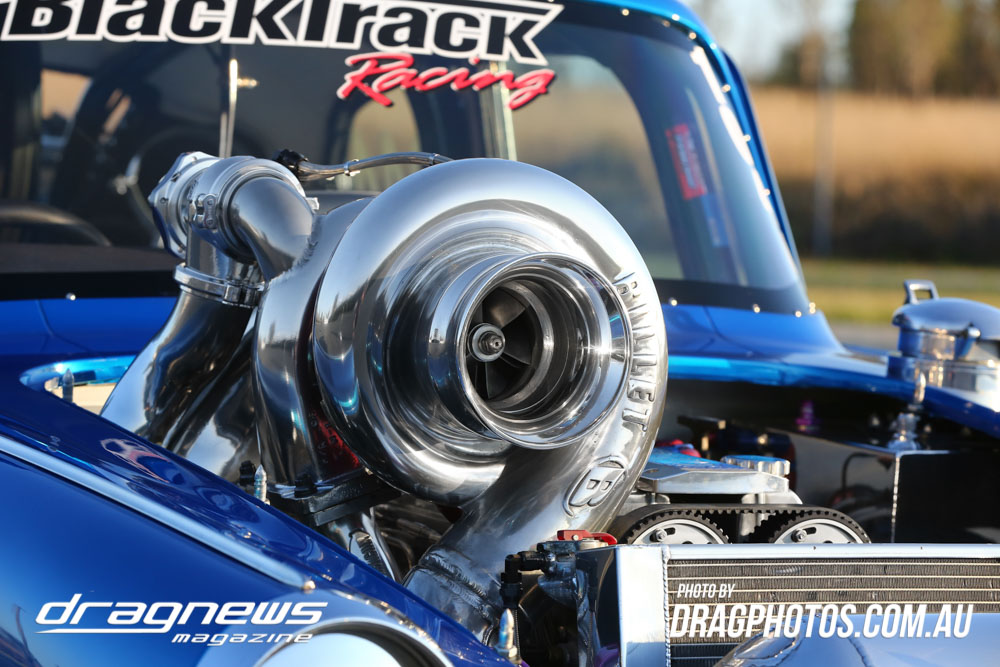 Beginning life with an 1800cc Fiat twin cam motor, boost was always a valued member of the family. First Penny toyed with a Sprintex supercharger, before going to a GT35R turbo and water-to-air intercooler. Penny regularly raced at Jamborees each year at Willowbank, the annual super-gathering of everything sport compact.

Each year he would get a little quicker, even if he was trying to do it with a five speed transmission. But looking out his side windows, Penny saw something he desired. “I took off doing my 13 or 12 second quarter mile and just as I was about to go over the line Rob Barac in his turbo Lancer blew past me doing 150mph and pulled the parachute. The sound of the chute coming out amazed me, booming away.

That was it, I knew I wanted to go fast.” Further horsepower inspiration was found from Scott Hoffman, the driver of a mental Toyota KE20 Corolla with a 2JZ under the bonnet. “Scott was doing wheelstands at half track with radials on it, I couldn’t believe the car. That is what started me on that motor.” 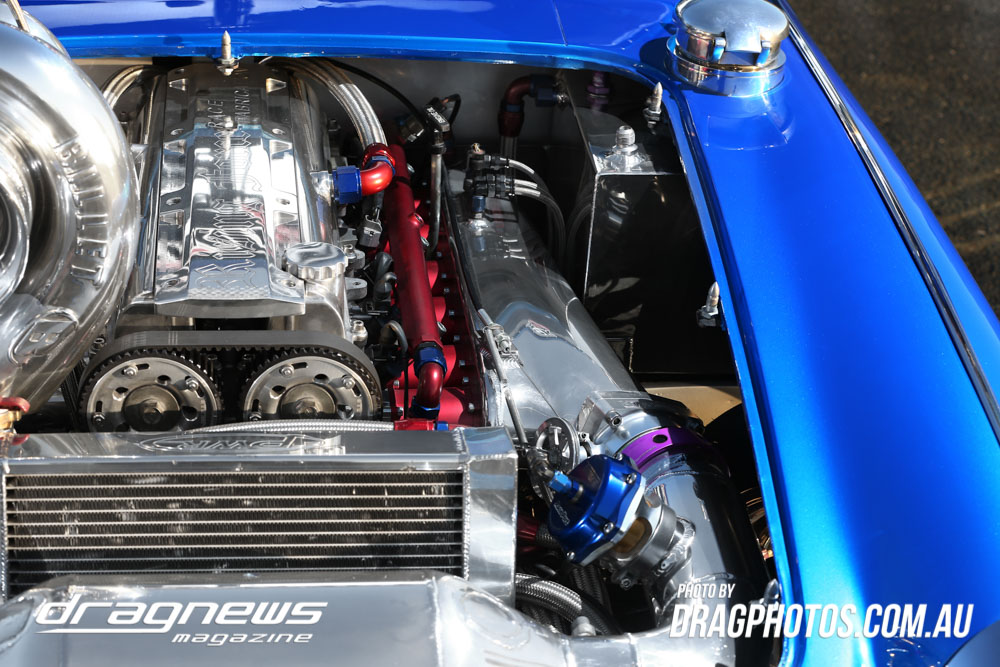 Penny is not afraid to tackle almost any job on building a race car – upholstery and wiring are about the only parts he will shy away from. A spraypainter by trade, he loves to look after his own fabrication, welding and engine building. “I used to rebuild and put together my Fiat motor on the lounge room floor,” he laughed. But when it came to the serious 2JZ build, Penny needed to go searching for some help.

He got on the phone to Gas Motorsports after seeing their Toyotas getting seriously quick. After listening to Penny’s story, Gas were kind enough to send him in the direction of Dave Stevens, one of their engine builders who was moving to Queensland. “He wasn’t really that interested in doing private work but when I started talking to him for a while we realised we lived in the same place in Sydney a few years ago and we had a few things that clicked.

I high tailed it up to Queensland and got to know him and he ended up building the whole motor for me.” And what a motor is has been. “This is the fifth year of racing for this engine and I have not touched it. It is exactly the same. “I have seen how Dave puts motors together – it is all about clearances, crank and rod clearances.

He painstakingly pulls the crank in and out, in and out, and uses multiple boxes of bearings to get perfect clearances. “I am convinced now that that has to be the way to put an engine together. I have been flogging it, every burnout I do I am on 9500rpm in top gear and it is 100psi oil pressure every time I start it so I really can’t say enough good things about it.” 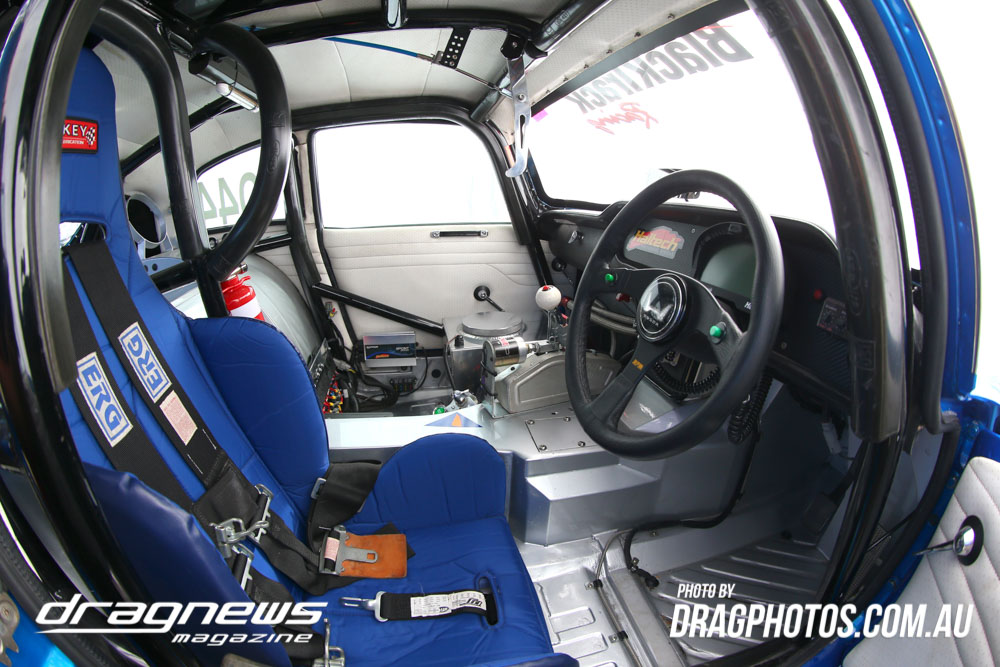 Surprisingly for such a small wheelbase, Penny said the car is a good handler.

The four link arms are barely six inches long while the tail shaft is also only a mere half foot. “A lot of people ask questions but the car goes straight. It will drift everywhere in the burnout but going down the track it stays in the middle of the groove even if it wanders a bit. It is not like those R100s, watching them scares me.”

Thirty two pounds of boost have generally gone into the bulletproof straight six, but for the recent Sydney Jamboree Penny decided to give 36psi a go. The extra horsepower turned the car into an animal. “The front wheels didn’t touch the track until half track and it was dancing on the front tyres on and off to 1000 feet. I had to get off it because it was heading in the wrong direction. “We turned it down to 32psi after four seconds and it made it drivable to get over the line.” The adrenaline-inducing passes left Penny in a quandary. “Now I don’t know where I will head with it, I will need to look at the four link and work out a way of keeping the thing from climbing to the sky all the time.

Once you start putting the bigger boost in it it is riding the wheelie bars the whole track. “It was even wrecking my wheelie bar wheels! It was ripping the rubber off the little billet wheels.” The future of Rising Force might be unclear, but Penny is already at work on another project – a clone in fact. He has started on another S600 coupe that will carry another big horsepower 2JZ for son Christian to drive. “Christian is always with me while we are racing, there is no way in the world I could do it without him.

He operates the AMS boost control set up and for the last seven years of racing with the 2JZ in it he has been by my side.” Phil sees the addition as just another way to add to the fun that keeps him coming back to the track. “My whole motive and drive in drag racing is not about beating the guy next to me, it is about entertaining people and having a lot of fun doing it,” he said. “I got into the final of 10.5 down there at the Sydney Jamboree and I literally gave it away because I just wanted to lay down a good skid in the final and I blew the tyres off it on the hit.

But I came back down the return road laughing and I won the best burnout trophy so it was worth it. “I sat in the stands watching racing at Willowbank and you see guys like Victor Bray come out and they didn’t care about their tyres, they did half track burnouts and that’s what people want to see. Watching a dragster or an altered go down there and do a perfect skid and perfect number doesn’t interest me. I want to be only just in control and putting on a show.” 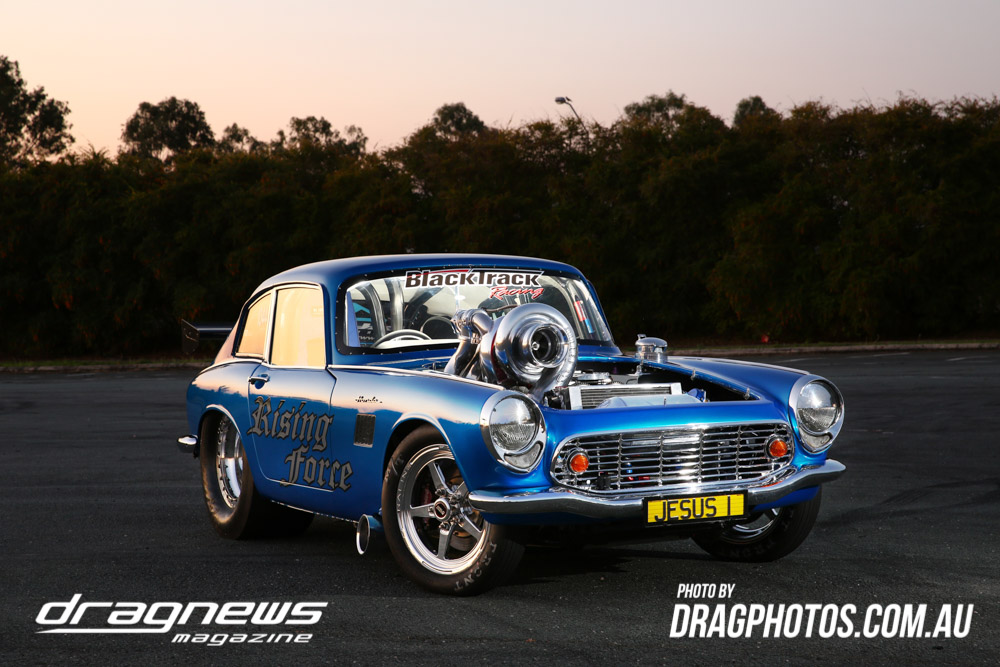 Penny competed at 19 events last year, from the major strips like Willowbank and Sydney Dragway to regionals like Warwick and even temporary sites like Gunnedah and Casino. “I love showing people a mechanical monster. I talk with them and I tell them how I built this in my garage and I just love doing the burnouts for them. That is mainly my motivation – to entertain people and promote Australian drag racing.” There is one question that comes up regularly for Penny – why [JESUS] on the number plate?

While some might think the plate describes the casual violation of the second commandment people regularly utter on seeing the car, for Penny it is about living a life with values. “I’m not a nutter, I’m not a fanatic, I don’t even go to church. I say if you want to see how this world can be a better place and a better way of living, then you follow what Jesus said. Literally that means love your brother and if someone knocks on your door give him something to eat, put a coat on his back as well, this is good stuff.”

The odd prayer or two wouldn’t go astray at the wheel of this beast, where even lack of visibility is part of the fun for Penny. “I can’t see past the turbocharger. I thought why not have it hanging out as a showpiece like a supercharger? It is not dangerous, you can see enough to know you are not going to hit anything.”

And in the end, isn’t that the only thing that counts? 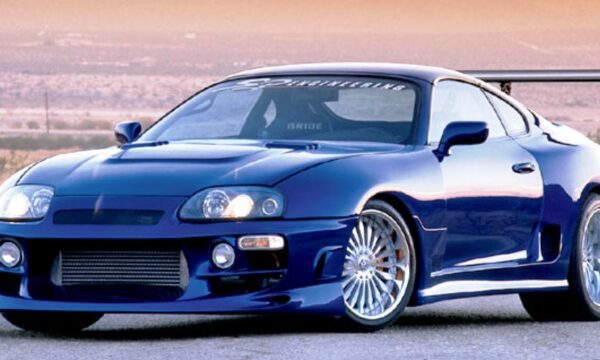 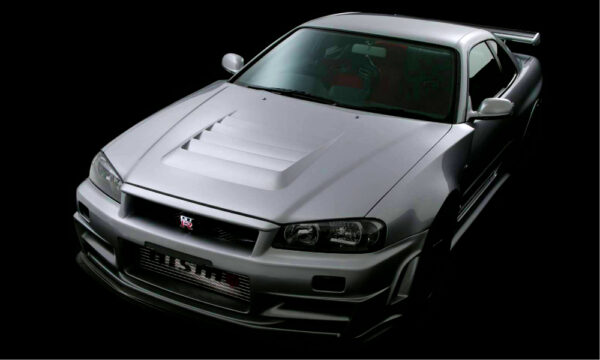 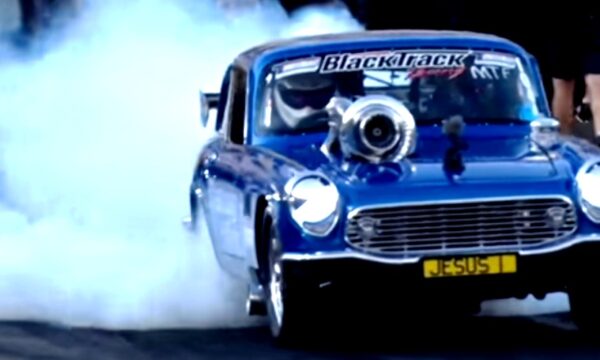